Showing posts from 2014
Show all 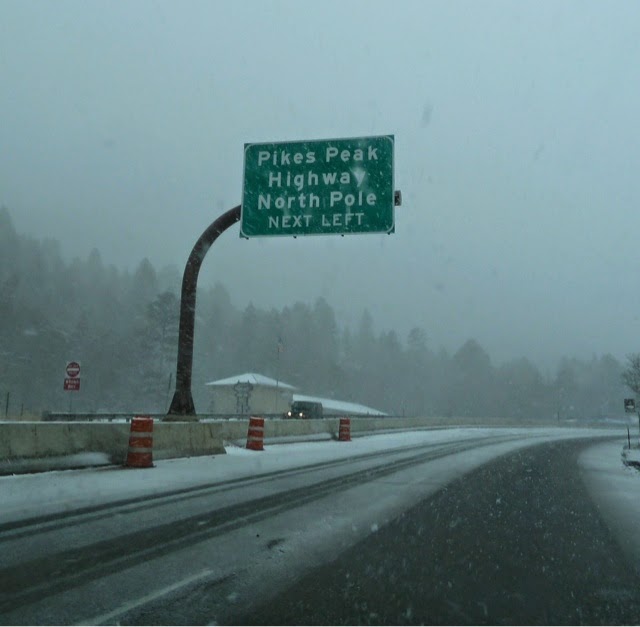 As is common at the end of a trip, there are photos that didn't make the cut for earlier posts but still deserve their moment of light.
In this last post for this particular adventure, I share some of these.
Thought this a great sign, especially in the snow, on the day we drove to higher elevations to find winter, which was available at about 8500 feet.

On the way back down the mountain, we decided to stop at the North Pole, which we knew to be a tourist trap, but it was even worse. It was a very sad tourist trap. With only 10 days to go till Christmas, on a Sunday afternoon, this was the scene at the parking lot.

The North Pole is open July thru December. In good weather, there are amusements to enjoy. Note the Tilt-a-Whirl on the background.

We went to the Denver Art Museum. It is in a very modern building with a very small collection of second tier European artists but the very best collection I've ever seen of Native American arts and crafts. 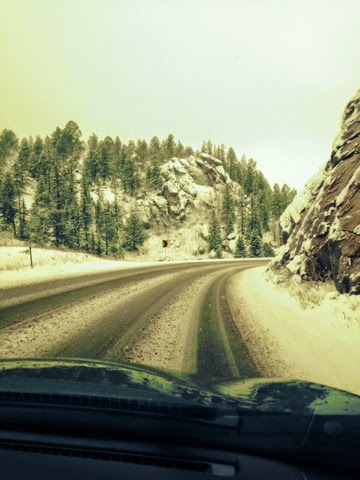 This was a trip of many jogs to the memory.
As I mentioned earlier, we were in this town in 1998 with our kids and we recalled the Garden of the Gods, though it seemed smaller now and I can't figure why, and the swankiest restaurant around where we had Alex's 14th birthday dinner. We spent much of that trip trying to find things Miles would eat because he was in a phase where all he wanted was chicken nuggets and pizza. I think that phase lasted about 9 years. And we recalled driving up and over the mountains when poor Miles got so nauseated - altitude sickness is often worse for the young - and he barfed in the back seat. We pulled over to clean up the mess and Alex distracted him with extensive dialogue from Wayne's World, one of our oft-watched flicks, until we made it down to where his nausea went away. I count that as the moment at when Alex stopped fighting with her brother.
On Sunday we drove to a higher altitude in search of snow, and though we felt a tad lightheade…
Post a Comment
Read more 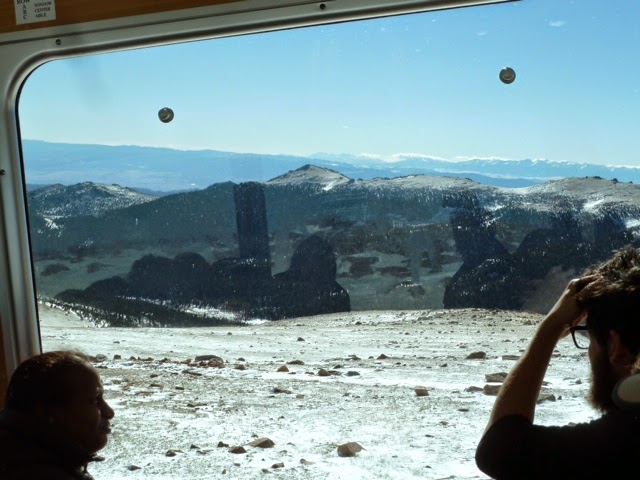 The trip up Pikes's Peak wasn't quite what we had planned.
We were thrilled that the weather forecast was accurate and it was a beautiful, clear skies day, since yesterday had been grey and there was snow at the higher elevations. When we arrived to board, we were told that due to a plumbing failure at the cafe at the peak and/or snow drifts across the track, we would be stopping short of the top.
Okay. What they didn't tell us was that when we stopped, we would not be allowed to get off the train because there was no there there, so the spectacular views would all have to be experienced through the windows, and since the train doesn't turn around, those of you unlucky enough to be on the left side of the trains well...too bad. You'll just have to crane your neck and lean both directions.
Disappointing, but we were offered a refund before departure and we decided to go anyway, so oh well. We did make one stop, in a non-scenic place where the Port-A-Cans were. 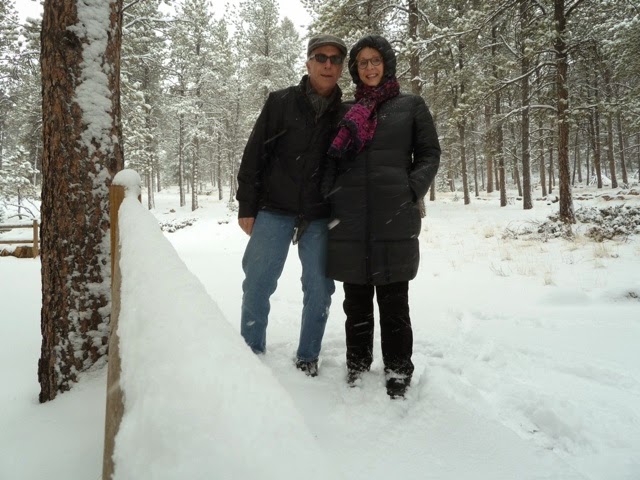 Sunday morning under grey skies with a hint of snow flurries.
Went to a cafe for a bite then headed west to the Florrisant Fossil National Monument, one of the best places for carefully preserved fossils of delicate things, like insects, in the whole world.
It was clearly getting colder and snowier as we climbed in elevation, much to our delight.
Thought the park had been open for two hours, we were the first at the welcome center and were happily greeted by a very bored ranger who was glad to have people to talk to. We saw fossils, watched the informational video and then headed out to see the enormous petrified stumps and revel in the snow.
We also took the opportunity to get our National Parks lifetime passes, now that we are both 62. Lifetime pass for $10! Bless you Teddy Roosevelt and all who have kept the flame burning. 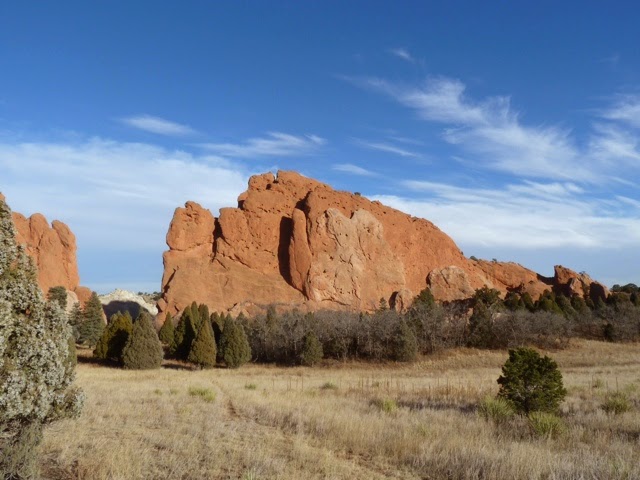 I am sure that many of you have been to the Garden of the Gods. We were here in 1998 when we did the classic summer road trip with the kids.
What can I say- it was a beautiful day. Couldn't help but wonder, though, if the fundamentalist Christians, like Focus on the Family which is HQed in Colorado Springs, are upset that their city owns a park about gods, plural.

I don't know if this has a name, but I'd call it T Rex head. 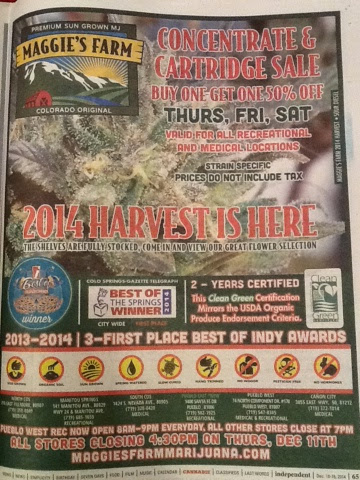 Maggie's Farm is about the only place for miles around to buy recreational pot. (Didn't Dylan describe that farm as an awful place where employment termination was imminent? But I digress.)
When the law passed, built in was the right for each municipality to decide if it wanted to allow recreational sales along wih medical sales and many towns have said no but Manitou Springs said yes.  Twice. In last November's ballot was a provision to repeal rec sales and it was defeated. From July to October of this year, the city reaped about a quarter million in sales tax. For a city with a population of 5200, that's not chump change.
Because the shop itself has a no photos please policy, here is their full page ad in the alt weekly.

Here is how it works.
You walk into the lobby and take a number. When yours is called, you show your ID to the young clerk who records the info. (Purchase limits are lower for out of state buyers.) Then you sit in a row of about 20 chairs along the big w…
Post a Comment
Read more 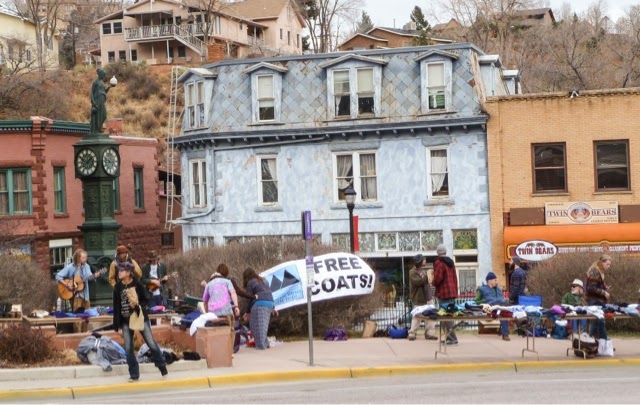 This is the town square, which is an elongated triangle, where mid-day Saturday finds a free winter clothes giveaway with a three piece, Dead influenced band with assorted hippies, both original and latter day, trance dancing about. We were across the street having lunch in a cafe watching the sun salutations and swirling dreadlocks of the scene.


Why do I want to shout at these people to grow up? Why am I so very annoyed by the youngsters, the obviously under 25 year olds trying to party like its 1969?  Daft Punk, not Grateful Dead. Why do you want to emulate your grandparents, I ask in my head.
Indeed, what is so funny 'bout peace, love and understanding?
Mark asked if I had anticipated longevity for any part of 60s pop culture.  In 1964 did I say to myself that the Beatles would still be commonly heard in 50 years? No way. Did I expect, in 1967, that tie dye T shirts to be common in the 21st century? Hell, no!  Did I think I would live to see legal weed? Actually, I did.
And that is …
Post a Comment
Read more 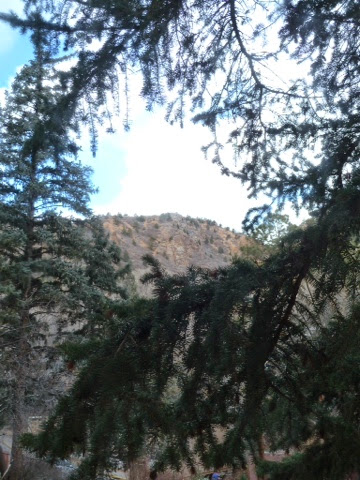 Remembering the fun of being in Northern Europe last year in December and being both Michiganders with a nostalgic and romantic attachment to snow, I decided we would have a little vacay in a winter climate but NOT a ski town because we don't ski and they can be very expensive. Flights to Denver were cheap and easy in mid-December so we ended up in a town we had visited with our kids back in 1998.
Manitou Springs, Colorado. It's the mountains! Surely there will be some snow, right?

When we got off the plane it was 63 degrees.
Oh well, we knew it was far from a sure thing. Mark took the photo below from our stoop and I think that is Pike's Peak. Maybe not.

It's a cute cabin with a wee kitchenette, an enormous spa tub and the cast iron stove in the bedroom is gas fired and has a remote, but it is the main heat source. This is all to the good. But the location is very awkward. It is 32 uneven steps up from the car to the cabin, which sits about 6 feet from the owner'…
Post a Comment
Read more 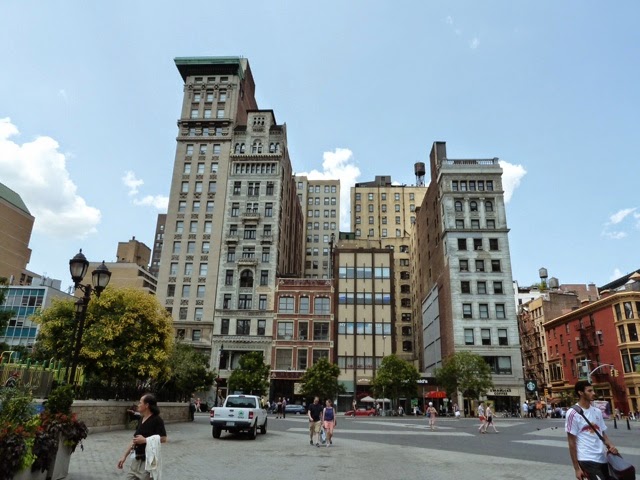 Now one of my favorite NYC public spaces...at least on this Sunday afternoon...
Checkers!  But not just any checkers.  When I was growing up we called the big ones Texas Checkers.
And Krishnas supplying the soundtrack.
Must have been a dozen chess tables in action (along with a seemingly ever-present Whole Foods).
Token nudity.
A street vendors inspiration/stimulation.  (Sheila bought an excellent cheap phone case from this guy.)
Apparently this clock with 8 digits count up from midnight and 7 digits counting down to midnight had been keeping bad time in both directions, but was recently corrected.  It remains remarkably unmoving art (for a number of reasons I won't bother to enumerate in this sitting)...
...particularly compared to this find!  Victor, a Cuban immigrant, called it "mixed media".  It called my name from across the Square.
Always figured the subway canopy was a nod to the Paris Metro.

- August 11, 2014
It wouldn't be an honest blog if I didn't admit tha the vacation was, shall we say, impared.
I have pictures of my ugly bruises, still ugly after 11 days, but I think I've hit my limit with last spring's hammock attack bruise, so I'll spare you the gorey visuals.
Still cannot wear a shoe. Hands to shoulders, still in pain. Cannot open a twist off cap, cannot grasp, can't go to the grocery store because I couldn't carry the bags.
It's hard to feel like the biggest klutz especially when the DH is fit as a fiddle and ends up being my Sherpa, again and again.
Hurray for codeine. It was only with that aid that was able to walk and go places and do things and even drugged, I was far from fully functional.
Should have traveled more when I was younger, though I know why we didn't.
Post a Comment
Read more 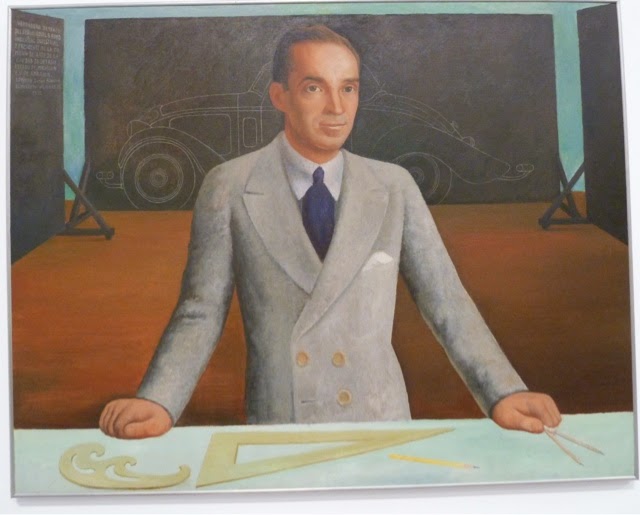 In 11 days, we went to three art museums, one history museum, and three art galleries. It is foolish to take photos of art, because the are so lame in comparison to the real thing, but we do it anyway.
Two galleries in NYC presented a curated show whose theme was Detroit. There were all sorts of things included, old and current and some whose connection to the Motor City was not clear, but it was fascinating.

This is Diego Rivera's portrait of Edsel Ford. We wondered how many visitors knew the story of how Ford convinced the directors of the Detroit Institute of Art that they must not destroy the 4 enormous murals Rivera was commissioned to paint. The images were controversial and small minds began to press for their destruction on the grounds that Rivera was a communist, but Edsel saved them. They are exquisite and amazing and, say what you will about the car named after him, Edsel Ford is a hero to all who love truth and beauty.
There was also an endless loop of the MC5 from a Ger…
Post a Comment
Read more 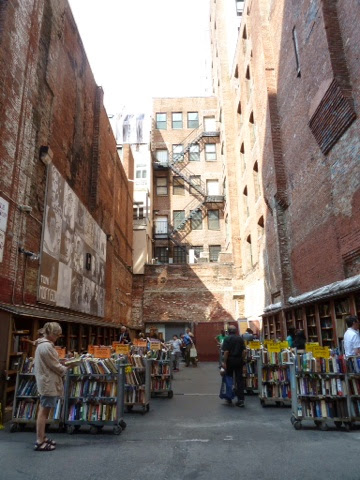 No theme here...
Books in Boston

Makes me want a weather vane.

The ceiling of of MFA Boston as seen in the mirror they have placed on a table top.

We not only like visiting cemeteries, but small town hardware stores as well.

Alas, the spigot marked ice water did not deliver, but I wonder how this century old hotel in Brattleboro, VT. would have accomplished that and when.

We ended up at the Norman Rockwell Museum, lured in by their Edward Hopper exhibit.      Hopper did plenty of work in the advertising field, which they showed, and hand made greeting      cards.

Rockwell's studio is exactly as he left it. Above and below, some of his books.

And our final abode before NYC.